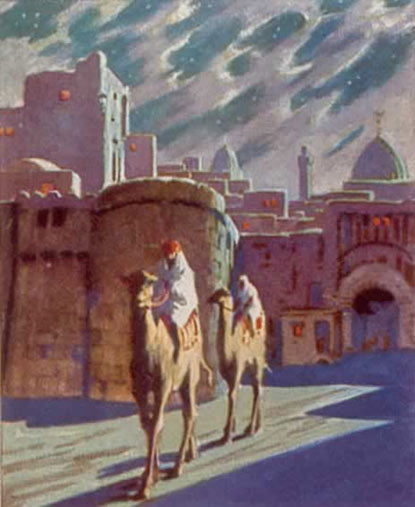 Ibn Fadlan is famous for his travels to Scandinavia, where he produced one of the earliest and most influential accounts of Viking culture. Ibn Fadlan described the Vikings as having beautiful bodies but poor hygiene; perhaps his most famous contribution was his description of a traditional burial of a Viking chieftain. He left Baghdad and after crossing the Caspian Sea reached the valley of the Volga river where he encountered the Volga Bulgars. He traveled extensively throughout Northern Europe.

Ibn Fadlan has also made his way into popular culture, serving as the inspiration for Michael Crichton’s book, “Thirteenth Warrior.”

Muhammad ibn Hawqal was born in Turkey and was a writer and geographer. He spent the last thirty years of his life traveling the world. He documents his trip in his most famous work, “The Face of the Earth” (Surat al-Ardh). During his travels, Ibn Hawqal reached remote areas of Asia and Africa, noting that people lived in regions that Ancient Greeks had once claimed were uninhabitable. His travel logs were very useful to subsequent travelers, and included in-depth depictions of Muslim-held Spain, Italy, and areas of France with notable Muslim populations (Fraxinet, in Provence, being the best example). He also traveled through the Byzantine Empire, Eastern Europe, and what is now Pakistan.

Muhammah ibn Hawqal traveled to nearly every continent and major site on Irhal.com; tracing his footsteps could take a lifetime! For those of us who want to plan shorter trips, here are a few suggestions:

Ibn Jubair was born in Valencia, Spain. He was well-educated and an expert in the fields of law and Qur’anic studies. He ultimately became the governor of his hometown, where he later became secretary to the ruler of Grenada. A particular incident spurred Ibn Jubair’s decision to travel, and the story is told in the author’s introduction to his famous journals. According to Ibn Jubair, the leader of Grenada had forced him (under the threat of death) to drink seven glasses of wine. Although the ruler was later remorseful, Ibn Jubair was filled with shame for what he called his “Godless act.” As a result, Ibn Jubair decided to perform the Hajj. He stopped at many destinations along his journey, taking careful notes of his observations of the local population. He returned to Grenada after several years.

Trace Ibn Jubair’s journey on Irhal.com - for a great Mediterranean tour, trace his footsteps at the following locations:

Musa ibn Nusair and Tariq ibn Ziyad are credited with the conquest of Spain under the Umayyad Caliphate in the first half of the eighth century. Ibn Ziyad was a Berber Muslim general who initiated the conquest of Spain, while ibn Nusair served as a governor for the Caliph in Northern Africa and followed ibn Ziyad to help complete the conquest of Spain. The two men led separate fleets and ultimately reached the rendez-vous point of Toledo. They subsequently returned to Damascus, where they were welcomed as heroes.

Visit Spain and Damascus to relive the conquest: 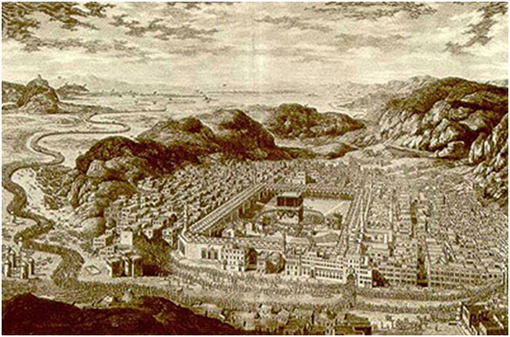 Muhammad al-Muqaddasi is probably the most notable Muslim traveler of the tenth century. His intellectual life began when he performed the Hajj at the age of twenty. After his trip to Makkah, al-Muqaddasi decided to devote his life to the study of geography. For more than twenty years, he traveled to nearly every Muslim country in the world. His journals would later be published as the Ahsan at-Taqasim fi Ma`rifat il-Aqalim (The Best Divisions for Knowledge of the Regions), and represent his most famous work. One of the most cited components of the book is its depiction of Jerusalem, the author’s native city. The work is considered an epic piece of both literature and geographic study, and is still referred to widely today.

Go to countries visited by al-Muqaddasi: 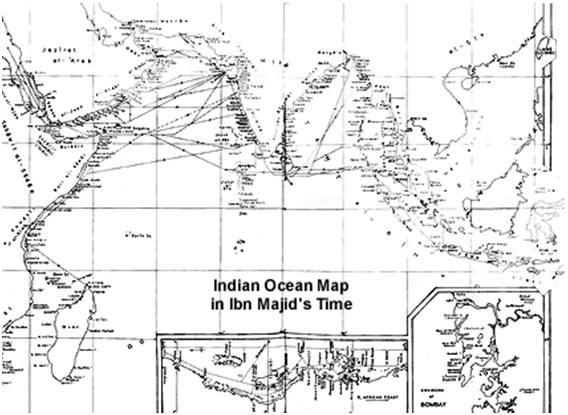 Ahmad ibn Majid was a famous navigator and Arabic poet who is most famous for having assisted Vasco da Gama in his quest to go around the Cape of Good Hope of South Africa. He is so famous that he is known as the first Arab seaman. His best-known work is “Kitab al-Fawa’id fi Usul ‘Ilm al-Bahr wa ’l-Qawa’id” (Book of Useful Information on the Principles and Rules of Navigation), which outlines the history and basic principles of navigation. His major contribution to world history was providing Vasco da Gama, a Portuguese explorer, with a map of the world that was unknown to other European sailors at the time. This map was crucial in da Gama’s successful venture to India via the Cape of Good Hope.

Visit South Africa to learn more about the quest to sail from Europe to India! 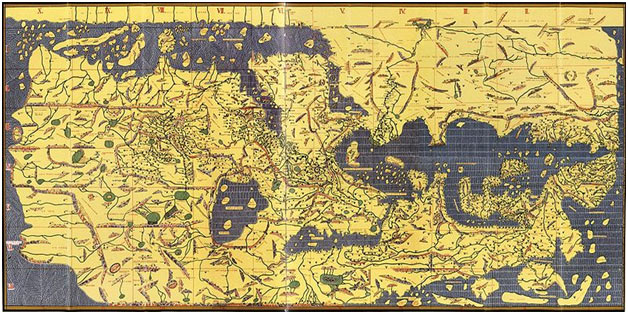 Muhammad al-Idrisi was a famous geographer and traveler who was a descendant of the Idrisid rulers of Morocco, and by extension, a descendant of the Prophet Muhammad. He was an inspiration to Vasco da Gama, Christopher Columbus, and Ibn Battuta. During his early life, al-Idrisi traveled throughout Europe and North Africa. When he reached adulthood, he spent years compiling information on Africa, the Indian Ocean and the Far East from merchants and other travelers. He used this information to complete his crowning achievement, the Tabula Rogeriana, which is considered to be the most accurate map of its time. Largely because of this work, as well as his written text, “Nuzhatul Mushtaq,” al-Idrisi is considered by many to be the greatest cartographer of the Middle Ages.

Visit some of the European Sites that Muhammad al-Idrisi mapped in his early life - information on Irhal.com! 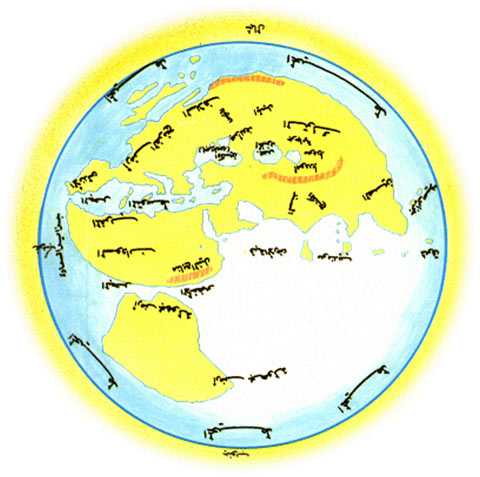 Al-Masudi was a famous Arab historian and geographer who is known as “The Herodotus of the Arabs” for combining history and scientific geography in his world history, The Meadows of Gold and Mines of Gems. Born in Baghdad, Al-Masudi spent the majority of his life traveling and compiling his work. He traveled to East Africa, the Middle East, Persia, Russia and the Caucuses, India and China. Over his lifetime, he produced a number of books and encyclopedias chronicling world history; unfortunately, most of them have been lost. Al-Masudi may be remembered most for his original approach to historical research, which relied on cultural and social matters in addition to politics. He is known for using numerous sources, including the accounts of locals in the many cities he visited.

Look throughout Irhal.com to visit sites traversed by the great historian and traveler, Abu al-Hasan al-Masudi. 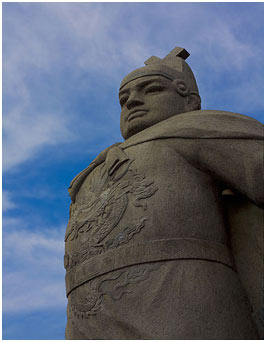 Zheng He is perhaps one of the most important navigators in world history, and certainly one of the most well-known adventurers in Chinese history. Born as Ma He to a poor Hui (Chinese Muslim) family in Yunnan province, he acquired the surname “Zheng” after serving as a vital assistant in Duke Yan’s successful usurpation of the Emperor’s throne. He was subsequently named commander of a series of naval expeditions designed to increase the might of China throughout the world. Zheng controlled nearly thirty thousand men aboard three hundred of the world’s largest ships (China’s navy dwarfed that of any other nation at the time). Over the course of his seven expeditions, which spanned twenty-seven years, Zheng visited South East Asia, India, and the Middle East. Upon seeing his fleet, foreign nations would send diplomats to pay tribute to the Chinese Emperor who would return home on subsequent expeditions by Zheng. He would die on one such return voyage near India in 1433. Though he has a tomb in China, it is empty; like most great admirals, he was buried at sea.

Expeditions similar to that of Zheng He’s were stopped shortly after his death under the belief that the voyage was not cost-effective; later dynasties actually banned oceangoing shipping. Many modern Chinese historians attribute the subsequent decline of the Chinese empire to this decision. Why? The argument is that the lack of expeditions abroad isolated China from growing technological developments in the Western world. Some also claim that the eruption of a black market for foreign goods decreased taxable imports, thereby reducing government revenue. 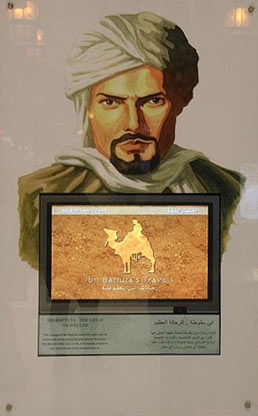 Ibn Battuta was a Moroccan Berber Muslim and scholar who has become one of the most famous travelers of all time. When he was twenty-one years old, Ibn Battuta set off for Makkah to perform the Hajj. He would not return to Morocco for over twenty years. Over the course of his voyage, Ibn Battuta traveled to 44 modern countries and traversed nearly 75,000 miles - a distance that easily surpassed his predecessors, as well as his near contemporary, Marco Polo. The famous account of his travels, titled simply “Al Rihla” (“The Journey” in Arabic), features a detailed account of the many regions of the world visited by Ibn Battuta, including most of the Islamic world, much of Europe, India and Central and Far East Asia. Upon completing his travel log, Ibn Battuta became a governor in Morocco, where he ultimately died in 1368 or 1369. His legend is well-known today by Muslims and non-Muslims throughout the world. 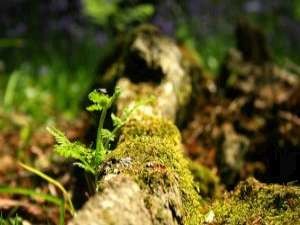 Batie Woods is a wildlife refuge spanning about 20 hectares. Joggers and hikers enjoy the hiking trails that run through the park. There is also a small zoo inside the woods.  ...

This hotel offers a petting zoo with a staff trained to make sure that the children have fun in a safe and friendly environment. Children can play with monkeys, a deer, a camel, a pony, flamingoes, and ducks. There is also a “Children's Garden" that has toys, swings, a trampoline, and a junior pool.   These facilities are available to hotel guests only.   Pyramids...

Address: 50 Abai Avenue, corner of Musrepov Boulevard, Abay Avenue, Almaty Timings: open all year round 10 am to 8 pm Inaugurated in 1972, this place has continued to entertain kids and adults, locals and tourists alike. The impressive architecture of the place is reminiscent of a traditional yurt. Shows range from animal performances to daredevil acts that will make your heart leap. M...

Popular among war buffs and historians, the revolutionary museum chronicles the rise of the Communist Party and its leader Ho Chi Minh. Although a little neglected, this museum is a treasure trove of old oil paintings, photographs and memorabilia chronicling the life of Ho Chi Minh and the early revolutions. There is an admission fee and visiting hours are between 8am and 11.45am and 2pm to 4.15pm...