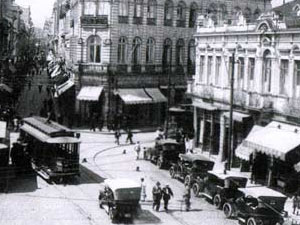 The city earned its name through the ignorance of Portuguese explorer and sailor, Gaspar de Lemos. He entered the huge bay (that would become known as ‘Baia de Guanabara’) in January 1502 and, thinking he’d sailed into a river, named the area Rio de Janeiro (January River). The Tamoio, natives of that area, were originally living there. The French became the first settlers of the area, establishing a colony in 1555. The Portuguese, wanting to keep their claim over the area, eventually kicked them out in 1567, despite the French alliance with the Tamoio who hated the Portuguese for their cruelty. The Portuguese stayed on, eventually expelling the Tamoio in a succession of devastating battles. Building their empire through sugar plantations and the slave trade; the Portuguese settlement would grow during the Minas Gerais gold rush of the 18th century. The result of this expansion was that the Tamoio tribe was wiped out, those not taken into slavery dying of disease or being sent to be ‘pacified’ by the Jesuits in settlement camps.
By 1763 the population reached 50,000 people and Rio became the colonial capital of Brazil. By the time the 20th century began, with an economic surge in coffee and mass immigration from Europe, Rio had reached 800,000 residents. The 1920s to 1950s are considered to be Rio’s Golden Age, with the city becoming a romantic, exotic destination for international aristocrats. Brasilia would eventually take over as Brazil’s political capital in 1960 but Rio continues to be the cultural capital of the country.  In 1992 it was chosen as the host of Eco, the United Nations Conference on Environment and Development.