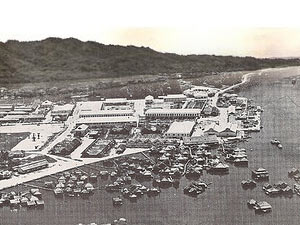 The earliest references to Brunei begin with its connections to the Chinese trading practices in the 6th century. Before the country was established as an Islamic state, Brunei was part of the Sumatran Srivijaya Empire (later becoming the Majapahit Empire of Java). However Brunei was not to establish itself as a power state until its ‘Golden Age’ of the 15th and 16th centuries under the rule of Sultan Bolkiah (the fifth sultan). The 16th century also saw the arrival of the Spanish and Portuguese explorers but they failed to make a lasting connection to the country via force. A subtle approach by the British in the 19th century, in the form of Sarawak’s first raja James Brooke, saw the fall of Brunei with the sultan forced to accept the ‘treaties’ proposed by the raja who had taken hold of the town of Kuching. Brunei remained a British protectorate till 1888 until it was eventually split down the middle in 1890.
By 1929, with the country on the cusp of being dissolved forever, oil was discovered making the country an economic power overnight. Sultan Omar Saifuddien (the present sultan’s father) kept the country out of the Malaysian confederacy, preferring the British protectorate and aimed to keep the oil on home soil. It is through him that Brunei can credit its economic development. By 1962, the British put pressure on the sultan to hold elections, the end result being the opposition Ra’ayat Party winning a full victory with its aim to keep Brunei independent and make the sultan a constitutional monarch within a democracy. When the sultan refused to allow this new government into power, an armed rebellion broke out with the support of the Indonesian Army. With the support of the British forces, this rebellion was crushed and an ‘Abode of Peace’ has existed under emergency laws ever since.
When the sultan abdicated in 1967, his popular heir Sultan Hassanal Bolkiah reluctantly lead Brunei into complete independence from Britain in 1984. The country still retains close ties to the British. After independence, the country reverted into Islamic fundamentalism with Melayu Islam Beraja (MIB) being brought forward as the new national ideology. This doctrine puts importance on Malay culture, Islam and the monarchy, and it promoted through the ministries of education, religious affairs, and information. MIB became compulsory in schools from 1994.