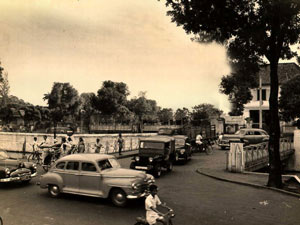 The Portuguese arrived in Indonesia in 1522 and at that Sunda Kelapa was a bustling port in Jakarta, which was part of the Pajajaran dynasty (the last Hindu Kingdom of West Java). The port is located north of the current modern city. In a span of 5 years, 1527, the Portuguese had developed a strong foothold in the city but were later driven out by the Muslim saint, Sunan Gunungiati, the leader of the Demak. Consequently, the city was renamed Jayakarta, which means ‘victorious city’ and became a fiefdom of the Banten sultanate.
The Dutch and the English were fighting for power for the city in the early 17th century. In 1618, the Javakartans, backed by the English, took over the Vereenigde Oost-Indische Compagnie (VOC) fortress. However, the Dutch managed to defend themselves until May 1619, but then re-enforcements stormed the town and reduced it to ashes. Since then a stronger shoreline fortress was built and the town was renamed ‘Batavia’ after a tribe in Netherlands (during the Roman times). Eventually, it became the capital of the Dutch East India Company.
Within Batavia, the Dutch built tall houses and canals in an effort to emulate Amsterdam. This helped boost the city’s population as both Indonesians and Chinese migrated to the area to take advantage of commercial opportunities.
In 1740, Batavia suffered a tragedy whereby on October 9, 5000 Chinese people were killed due to ethnic unrest. The Chinese were later moved to Glodok, outside the city walls. Later, between 1735-1780 a number of other people also scattered outside Batavia due to epidemics and the city spread farther south.
Dutch colonial rule ended with Japanese occupation in 1942 and the name Jakarta was restored and it became the official capital in 1950.