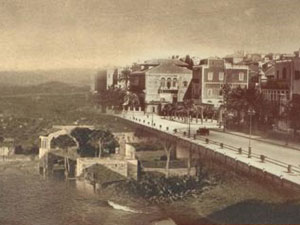 The first mention of Beirut in the history books comes from more than 3,000 years ago.  Named for “the wells”, or Berytus, thanks to its vast reserves of fresh water, it was a Canaanite port built on two hills which came together to form a peninsula into the Mediterranean.  The city hit the big time in 64BC when it was conquered by the Roman general Agrippa.  Beirut became an important port in the Roman, and later Byzantine Empire.  It also became home to a legendary law school, which would go on to produce the Justinian Code.

A series of earthquake in 551AD devastated Beirut.   More than 30,000 residents were killed, and the Byzantines essentially abandoned the area rather than rebuild.  In the 7th century, the Umayyad Caliphate conquered the region and began to reestablish Beirut.  In the coming centuries, the city began to regain its prominence.  A grid system, parts of which can still be seen today, and city walls were built.  The port was reestablished and by the 10th century Beirut had once again become an important center of trade and commerce.

In 1110, the city was conquered by Christian forces during the First Crusade.  It was eventually taken back by the Syrian Mamluk Empire in 1251, starting a long tradition of Syrian intervention, and later by the Ottomans.  Beirut became a central port in the spice trade until its fortunes waned the 1500s, when sea routes around Africa were established.  It eventually bounced back, but conflict between the region’s tribes, as well as the wars of the Ottoman Empire, led to serious instability.  By the mid-1800s, things began to calm down and the population approached 100,000.

Beirut survived both World Wars relatively unscathed, and became Lebanon’s capital upon its independence in 1943 from France.  It prospered as the political, financial, and cultural center of not just Lebanon, but the Middle East as a whole.  It was a chic tourist destination for travelers from all over the world.  Then came the civil war.  Beginning in 1975, Beirut was devastated.  Downtown became a no-man’s-land and thousands of people left or were killed.

The war finally ended in 1990.  The recovery since then has been brisk.  The development company of the assassinated former Prime Minister, Rafik Hariri, facilitated much of the reconstruction.  Despite a brief war with Israel in 2006, and civil violence in 2008, Beirut has once again established itself as one of the world’s great cities, and the tourists have returned.