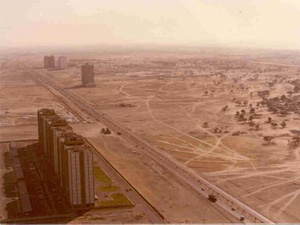 There is no historical record of Dubai until 1799, when members of the Bani Yas tribe established a town at Dubai Creek.  Before that, the area had important pearl diving and fishing industries, but little is known about this period.  In 1833 the Al Maktoum dynasty, a different branch of the Bani Yas tribe, came in and took over.  The city continued to grow throughout the nineteenth century, prospects buoyed by its position on trade routes between Europe, Persia, India, and China.

In 1892, Dubai became a British protectorate – part of ten other sheikhdoms collectively known as the Trucial States.  This began the steady influx of foreigners that has continued to this day.  The port quickly became the busiest in the region.  The Deira side of the creek became a hub of commercial activity and featured hundreds of shops, which attracted a steady flow of visitors and businessmen.  The population of Dubai reached 20,000 by the 1930s.  Unfortunately, the Great Depression and World War II would prove to be serious setbacks to Dubai’s economy.

Recovery was slow until the discovery of oil in the mid-1960s changed the fortunes of Dubai.  The visionary Sheikh Rashid Bin Maktoum utilized oil revenues to fund development projects.  He built schools, roads, hospitals, a modern telecommunications system, a new port and airport – all the infrastructure of a modern city.  He oversaw Dubai transformed from a barren desert wasteland to a high-tech hub of the modern economy.  He also colluded with his brother, Sheikh Zayed Bin Sultan Al Nahyan, the ruler of Abu Dhabi, to create a federation of the emirates in the region.  Subsequently the United Arab Emirates was established in 1971.

Though oil is no longer the main source of revenue in Dubai, the emirate has continued to remain relevant by focusing on free trade and tourism.  The population has exploded in the last two decades , to more than 2,000,000 people.  The recent economic crisis ground the city’s growth to a halt, but recovery has been steady.  More than 100 nationalities call Dubai home, and it is the Middle East’s most popular tourist destination.