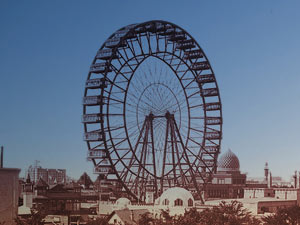 What is now Chicago was first settled by Europeans in the 1780s.  During the War of 1812 it was the sight of Fort Dearborn, an important outpost of the US Army.  The town of Chicago was founded along the southwest shore of Lake Michigan on August 12, 1833 after the remaining Native American population was forcefully removed following the Treat of Chicago.

The Great Chicago Fire of 1871 destroyed 10 square km of downtown and killed hundreds.  Allegedly started by Mrs. O'Leary's cow kicking over a lantern, the fire paved the way for the city's skyscraper boom.  The world's first skyscraper was the 55m, nine story Home Insurance Building, built by William le Baron Jenny in 1885.  By 1893, Chicago had become a world class city and played host to the World's Colombian Exposition, the most influential fair in history.

After World War II, the city's population began to decline somewhat, as middle class whites fled to the suburbs and manufacturers began moving overseas.  Today the population has declined from a peak of 3.62 million to 2.7 million.  Nonetheless, Chicago is a beautiful and cosmopolitan city, with world class museums, hotels, and dining.