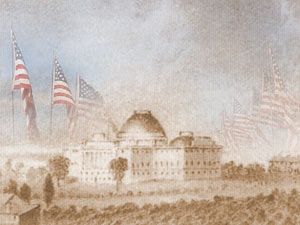 Originally designed by the French architect Pierre L’Enfant in 1791, it is hard to believe that its stately buildings once stood on a marshy swamp. George Washington created this special district as a federal power hub to avoid the problem of establishing the capital city in any one state, but it was a further six decades before it took on the shape of a capital city. Pierre Charles L’Enfant, a French-born architect, engineer, and city planner first arrived in the American colonies as a military engineer with Major General Lafayette.
On August 23, 1814, British forces burned the capital during the war of 1812. Initially, the British approached the city hoping to secure a truce, but were fired upon, which ultimately led to the sacking of government buildings. The Capitol, Treasure, and the White House were gutted.
The town’s ailing infrastructure was overhauled in the 1870’s by territorial governor Alexander “Boss” Shepherd, but it took another century to fulfill L’Enfant’s original vision of a world-class capital.