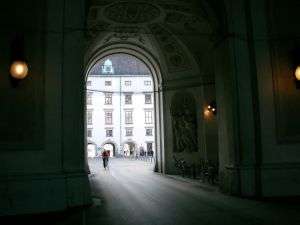 Vienna is quite an ancient city. It was founded around 500 BC as a settlement for the Celts. In the first century BC, Vienna became the Roman frontier city, guarding the Old Roman Empire against the barbaric Germanic tribes from the north.
Vienna was the center of the Babenberg Dynasty during the Medieval Period. In 1440 it was chosen as the royal residence city of the Habsburg dynasties, and from here it eventually expanded in size and importance to become the capital city of the Holy Roman Empire. Relics from the Roman era are still recognizable in the present day city center, including statues, monuments, and churches.

The Ottoman conquers of Europe in the 16th and 17th centuries were stopped twice just outside the well fortified city of Vienna, in 1529 and 1683.

During the Habsburg Dynasty (several centuries from the middle ages to 1806), Vienna established itself as one of the largest cultural and economical centers in Europe. The rule of Empress Maria Theresa was the golden era which catapulted Vienna to fame and glamor. Even today, the marks of the baroque and rococo are still recognizable in the city.
In keeping with its importance, Vienna became the capital of the Austrian Empire in 1805 and continued to play a major role in European and world politics.

In the second half of the 19th century, during the reign of Franz Joseph and his wife Elisabeth, Vienna rapidly developed into a modern city of the era.

The First Austrian Republic had Vienna as its capital at the end of World War I in 1918. Berlin replaced Vienna as the capital between 1938 and the end of the Second World War. Vienna's position as capital was restored after 1945.