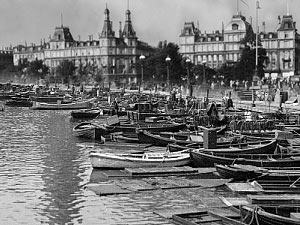 The foundation and creation of Copenhagen was credited to a great warrior in the 11th Century named Bishop Absalon.  The development and progress as a trading centre can be attributed to proximity to a harbor and abundant fishing facilities. Throughout history, Copenhagen has a lineage of monarchs; the first being the Danish Queen Margrethe I in 1397 ((1353-1412 – ruled Denmark –Sweden and Norway 1375-1412). The lowest point in the history of Copenhagen is the havoc brought about during the Napoleonic Wars which deprived the city of its people, sustenance and architecture.
It was during the 19th and the 20th Century that city evolved into a hub of culture, science, education, arts and politics. After the World War II, the city needed a rehabilitation scheme. In 1948, a policy called as the “Finger Plan” which redeveloped much of the destruction caused by the aftermath of the war. The beginning of the 21st Century was marked by the construction of the Oresund Bridge which connects the city of Copenhagen and  Malmö and greatly facilitates both rail and road traffic.
The modern city we see today reminds us of the rich cultural heritage and as we go deeper into the history, every sight unfolds a hidden mystery behind its existence.