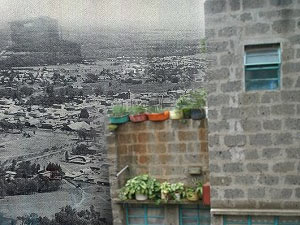 Till trains did not come into the area, Nairobi was just a little swamp land and a place for the Maasai people to quench their thirst enroute. Europeans colonizers had not shown any interest in it.  Under great pressure of civil wars and outbursts of diseases like cholera and chickenpox, the Maasai chief was forced to allow the British to construct their Mombasa to Uganda railway line through the Maasai grazing lands.

A depot was soon made in 1899 on the edge of the ‘Uaso Nairobi’ stream. Translated, it means cold water.  This started as a small supply depot and soon became the main depot of the Ugandan Railways. Temperatures and low gradient and height allowed it to be a base for the laborers and their British masters to take a break.
Once the line was complete, it made sense to the British to shift their administration to Nairobi from Mombasa. Distance and climate were crucial factors in this decision. It gained popularity and became stronger economically. The British turned their attention to traveling around and hunting for the immense game on offer. They constructed some grand hotels. The European settlers increased rapidly (in 30 years the numbers went up by 75,000) and started grabbing the fertile areas around Nairobi. The Maasai could only show their displeasure.
Meanwhile the Kikuyu’s displaced from their lands, moved to Nairobi. The British were busy with World War 2, after which they really did not want to focus on the problems of the African people. Meanwhile Africans forced to fight the war, were also angered and tired. The Mau-Mau rebellion started by the Kikuyu, carried on till 1956. Kenyatta, who supported them, was sent to jail till 1961. The continued rebellion finally forced the British to give independence on 12th December 1963. Kenyatta became the first President.
In 1998, the US Embassy was bombed by terrorists and has now been made into a memorial park.