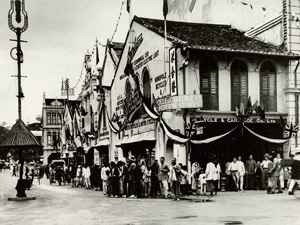 Kuala Lumpur was founded in 1857 by a group of miners searching for tin by the Kelang and Gombak Rivers, for which the city is named.  Kuala Lumpur is Malay for “muddy confluence”.  These early miners were ill equipped to deal with tropical diseases like malaria, and many fell ill and died.  But the tin lured even more miners to KL, and it soon became a sprawling and anarchic boomtown.

In an attempt to bring order and structure to the city, a local sultan gave reigning authority to a person known as Kapitan China.  He managed to bring order to the chaos, and by the 1880s, KL was an up-market boomtown.  Not even a devastating fire and flood in 1881 could keep the city down.  On the contrary, it initiated a building boom that culminated in KL becoming the capital of the newly formed Federated Malay States in 1896.

Under British rule, the Malay economy continued to prosper.  That all came to a halt when the Japanese invaded British Malay in World War II.  After the war, British control resumed, but in 1957 independence was achieved.  Kuala Lumpur was named the capital of the new Malay state, and remained the capital when Malaysia was formed in 1963.  The city continued to grow and prosper as Malaysia became the most developed nation in the region.  The capital was moved to the suburb of Putrajaya in 2001, but Kuala Lumpur remains the cultural and economic capital of the country.