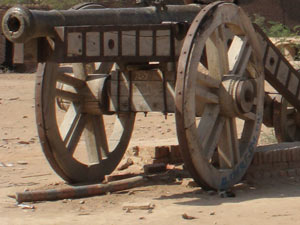 Lahore is an old city and one which has endured a very colorful history. It has been home to many conquerors who all eventually became captive to its spirit. It served as the Capital of the Ghaznavid Empire, conquered by Mahmud of Ghaznavi in the 11th Century, who incidentally became the first Muslim ruler of this region. It was subsequently ruled by many Muslim dynasties for a long time, the most famous of which were the Mughals who arrived in the 1520s. Babar was the first Mughal emperor to be bewitched by the city of Lahore.

The Mughal Empire saw some great rulers such as Akbar, Jahangir, Shah Jehan and Aurangzeb, each of whom contributed some architectural jewel to the city of Lahore such as the Lahore Fort, Wazir Khan Mosque, Badshahi Mosque, the Royal Baths, Shalimar Gardens and Hiran Minar. The Mughals eventually became drunk on power and did not maintain their empire by upgrading their military forces and weaponry. As a result, Lahore fell to the hands of Ahmad Shah Durrani from Afghanistan and later to the Sikhs in the beginning of the 19th century under Ranjit Singh.

After the demise of the Sikh Maharaja and due to infighting, Lahore fell to the hands of the British who stayed from the middle of the 19th century to the middle of the 20th century. The British contributed a lot to the city and its vestiges include architectural structures such as the General Post Office, National College of Arts, Punjab University and Tollington Market.

The importance of Lahore only surged as a result of the famous Lahore Declaration of 1940 where at the site of Minar-e-Pakistan, Indian leaders decided that the British must not only leave India, but India must be divided to create Pakistan as a homeland for the large Muslim population of the subcontinent. Since the Independence of Pakistan in 1947, Lahore continues to be an important cultural centre of Pakistan.