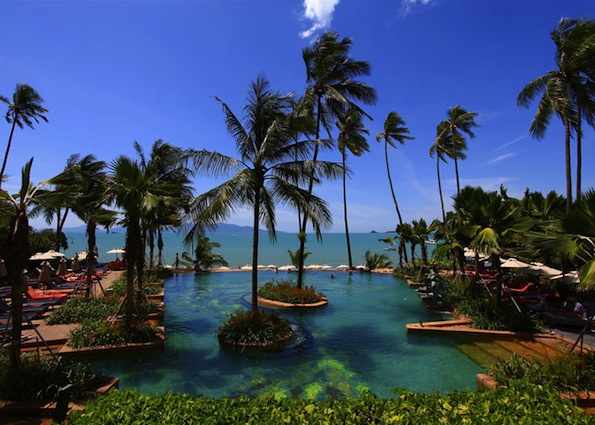 My husband and I did a lot of research to select our perfect honeymoon destination. We were looking for a relaxing beach holiday where we felt pampered, but we didn’t want to go to a crowded tourist hotspot. We were in search of luxury, natural beauty and good food, but most of all we just wanted some peace and quiet, so in July we finally found ourselves in Koh Phangan.

The island of Koh Phangan is located off the south-east coast of Thailand, about 15 kilometres from the more popular Koh Samui. Koh Phangan does not have an airport; the only way to access it is by boat, which is fascinating in itself.

If you’ve heard of Thailand’s infamous full moon parties, you may be aware that Koh Phangan is where they are held. But don’t be fooled into thinking that this is all the island has to offer; there’s a lot more to this blissful holiday escape than glow sticks and pounding music.

We selected the Anantara Rasananda as our resort of choice after reading good reviews online, packed our bags and set off. After making a short pit stop in Koh Samui to attend the destination wedding of two of our friends, we were more than ready for the honeymoon leg of our holiday. 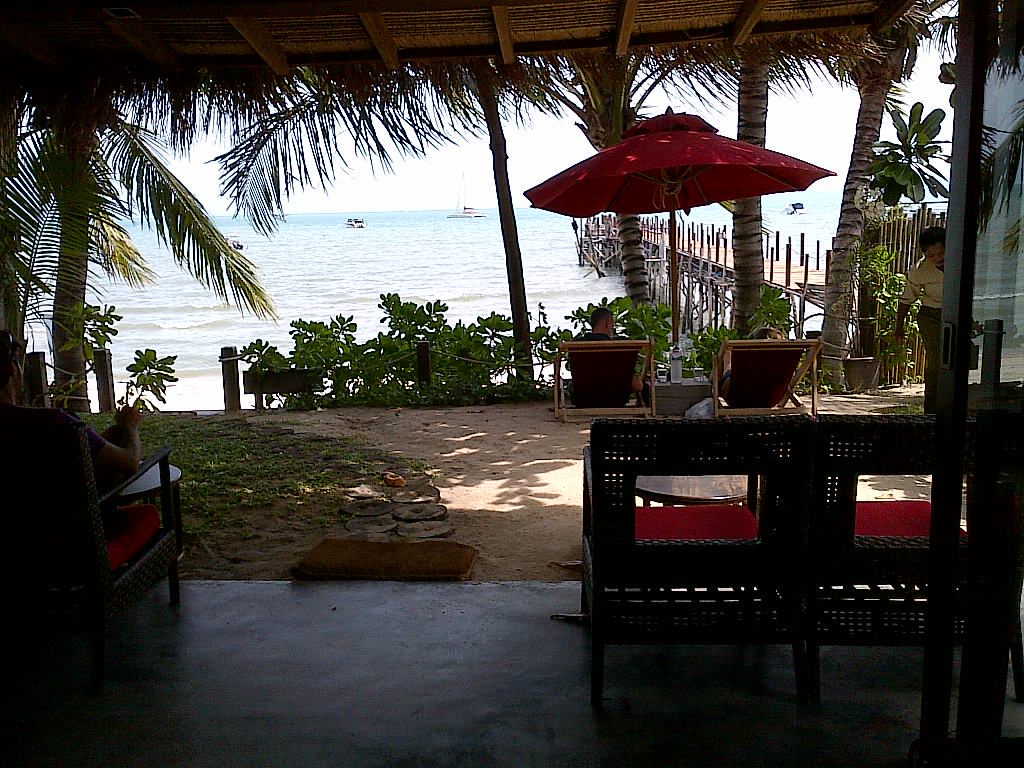 The Anantara sent a car to pick us up and take us to the hotel’s private beach where a speedboat was waiting for us along the shore. The courteous staff asked us to remove our shoes as we waded through the waves and made our way to the boat. It was a short and sweet 30-minute ride, during which we saw Koh Phangan’s stunning coastline as we sped all the way to the northern end of the island. 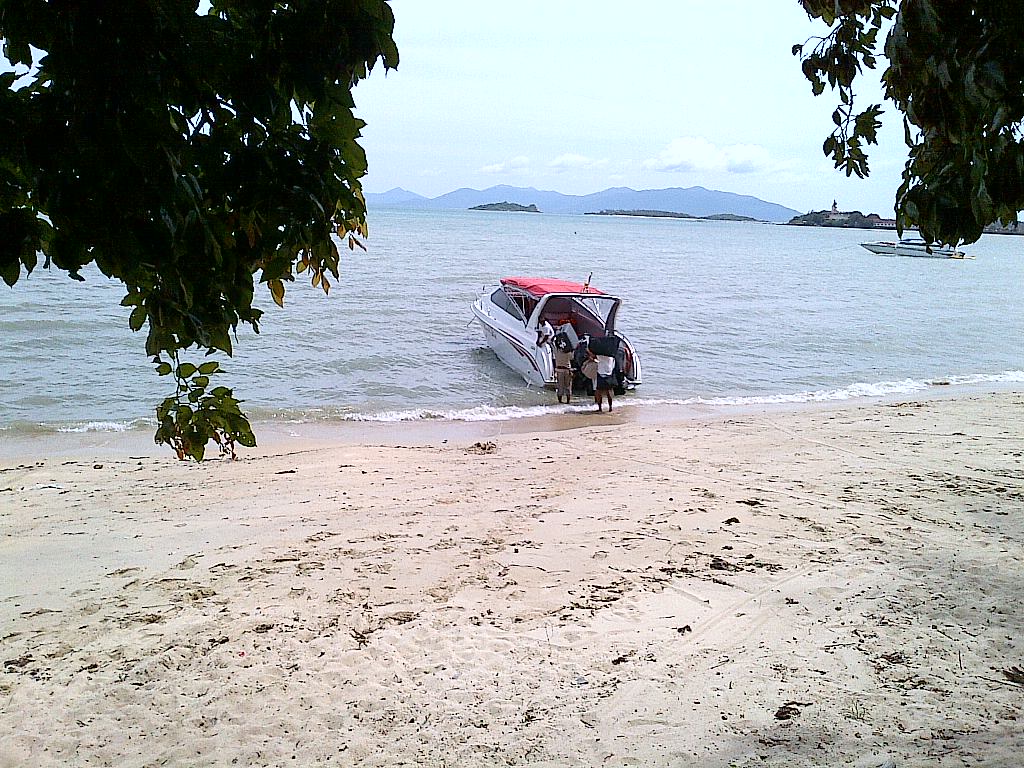 The Anantara Rasananda is a relatively small resort, comprising about 40 villas at the time we went. The laid back vibe of the resort was exactly what we had wanted, and our villa was gorgeous. The room itself was just beautiful and the private garden, outdoor rain shower and plunge pool were an added bonus. 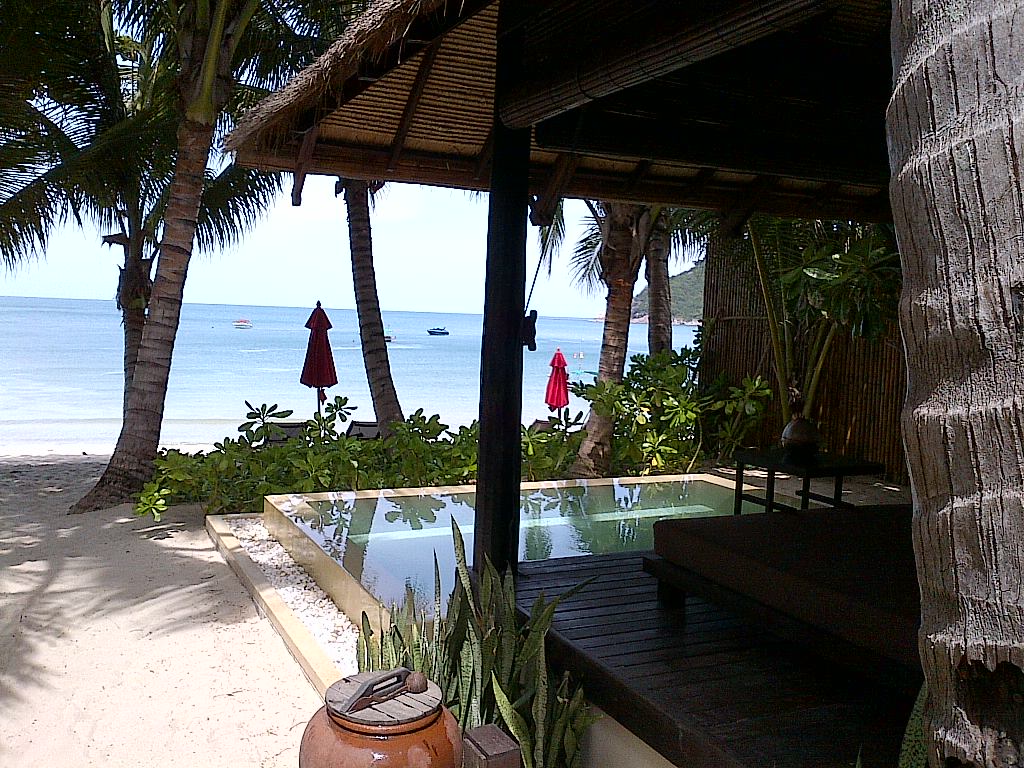 Our resort was tucked away on the secluded north-eastern beach of Thong Nai Pan Noi. Just behind the resort is a quaint little village scattered with an eclectic collection of restaurants, ranging from authentic French cuisine to my personal favourite, Jip Shop, which I thought was by far the best local restaurant there, worthy enough to warrant two visits.  Another great find was BTS, which was recommended to us by the hotel staff for delicious pizza. Though the charming village was limited to a dirt path only about 300 metres long, there was no shortage of fantastic (and legitimate) massage parlours, souvenir shops, internet cafes and grocery stores. 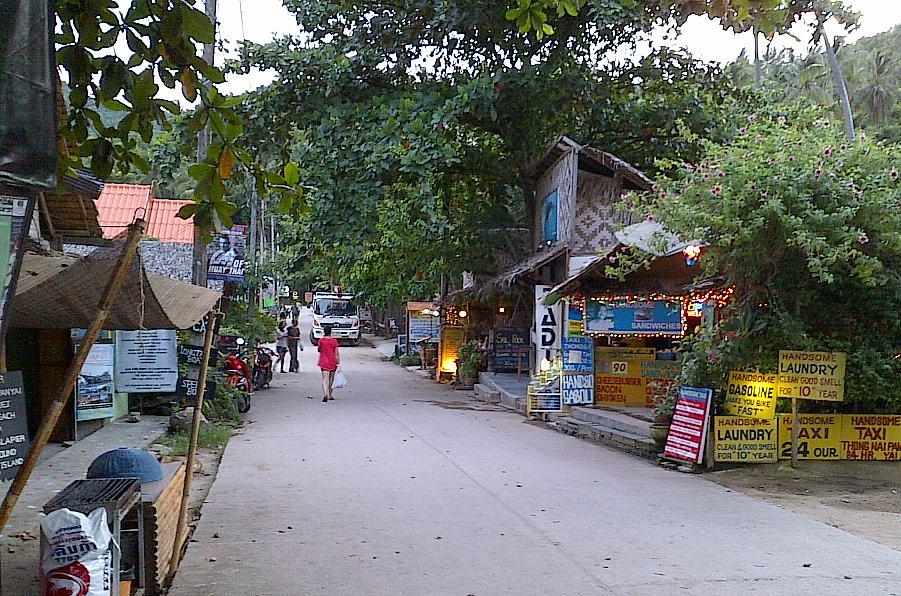 We faced an unfortunate spell of rain one afternoon and decided to use the opportunity to venture out and explore the island. We rented a jeep from the village, found a map and set off, not knowing what to expect. The first few minutes of the drive were great. Thanks to the hotel’s barefoot policy, we had grown used to the feeling of sand between our toes; having a road beneath us was a welcome change. We should have known better, though, because paved roads are a rarity in Koh Phangan and inevitably the rest of our hour-long drive consisted of us off-roading through muddy paths between the island’s hilly forests.

The southern end of the island is much busier than the north. On one east is the beach town of Haad Rin, where the full moon parties take place. It’s known to be a sleepy town in off-season, so instead, we opted for the port town of Thong Sala on the south-western side. If you happen to crave Japanese food while wandering around Thong Sala, you must go to Zen. Managed by Japanese expat Yamazaki Nobuharu, this hidden gem serves some of best Japanese food I have ever had, anywhere. Later that evening we paid a visit to Thong Sala Night Bazaar for some local shopping and dining options before making the hour-long adventurous drive back to the north. 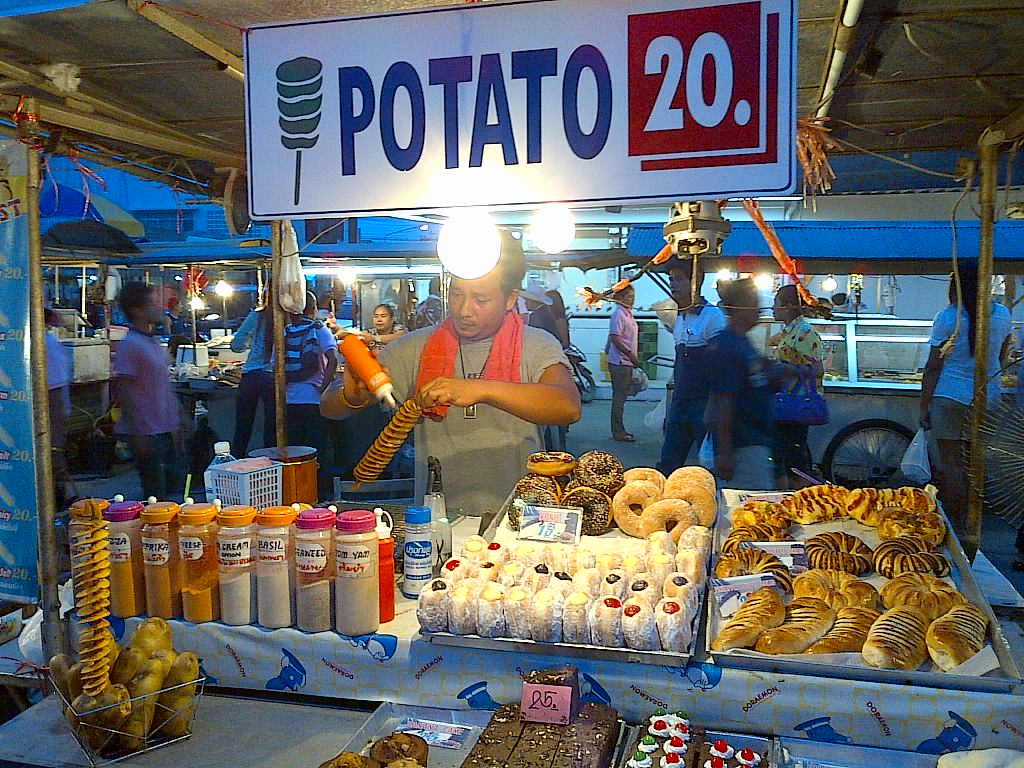 We had our jeep for a 24-hour time slot so the following day we drove to a nearby waterfall, Than Sadet. It was a bit of a trek to get to the fall but both the trek and the fall itself were worth the effort. 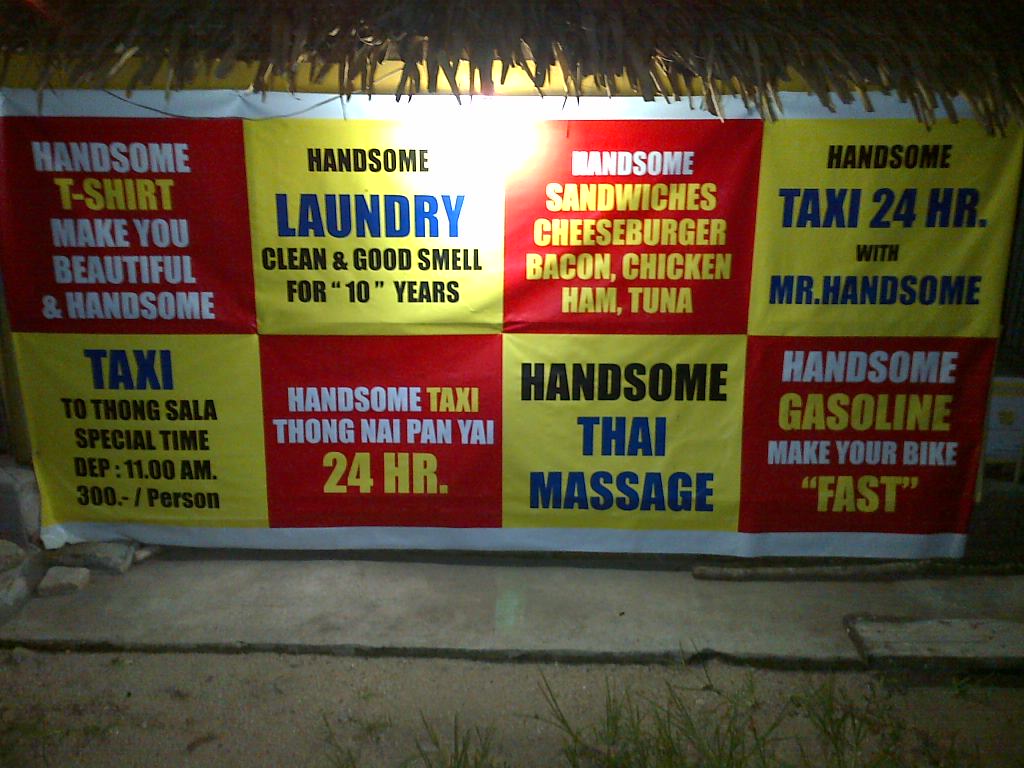 No mention of Thong Nai Pan Noi is complete without Mr Handsome, who is the face of what can only be described as a local retail conglomerate. From Handsome Laundry to Handsome Tours, this brand offers it all. Though I can’t say we tried all his offerings, I can vouch for the delicious Handsome Burgers.

As part of our honeymoon package the resort offered us a romantic candlelit dinner on the beach. We saw the lovely hotel staff setting up all afternoon and were touched at the effort they put into it. It was great to have a private dinner by the waves, secluded from the rest of the resort. Apart from the fantastic daily breakfast, this was the only meal we had within the hotel.

On our last day in Koh Phangan we went in for our spa treatment, which was also part of the honeymoon experience. The Anantara’s spa is absolutely breathtaking. We had had our fair share of fantastic massages in every roadside massage parlour we could find, but this was a whole new level of serenity. A pebbled pathway through lush green surroundings led us through the spa as we made our way up to the private tree house where we were to receive our massage treatments. It was a pampering experience and the massage itself was relaxing enough to put me to sleep. The prices were higher than those outside of the resort, but the spa itself is a must-see for anyone visiting the area. 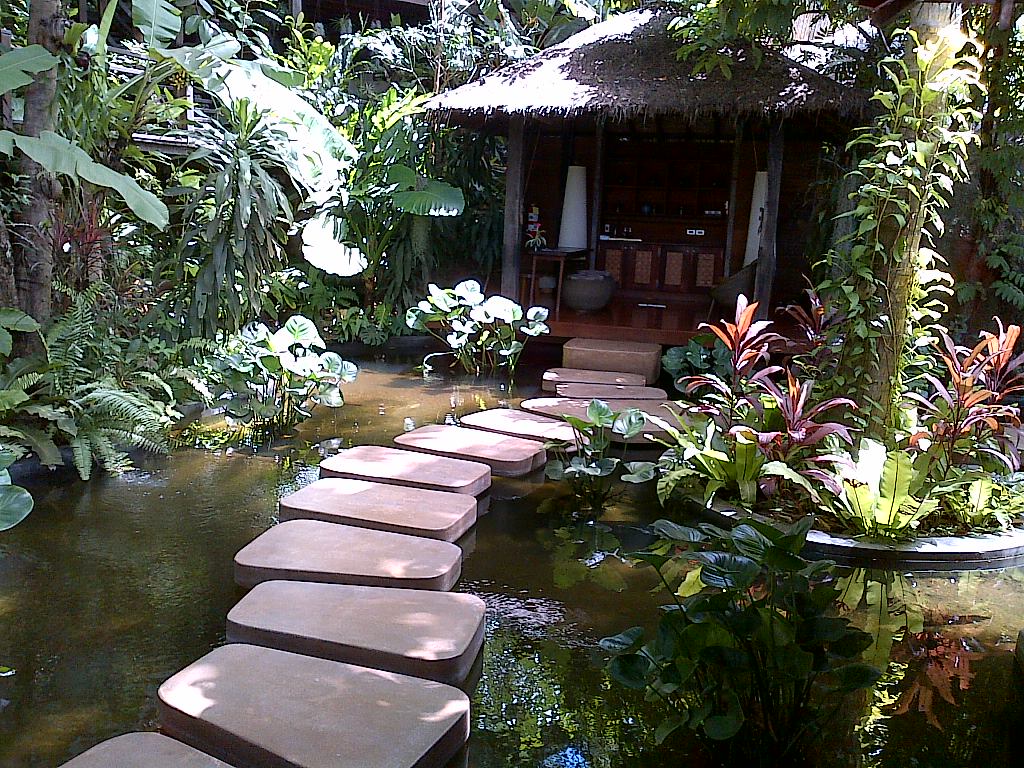 That evening we returned to the popular BTS one last time for some Tom Yum pizza and indulged in our second massage of the day. This time, we chose the cooling aloe vera massage treatment – highly recommended for the sweltering heat. It kept us cool for a good two hours after we were done and we regretted not discovering it sooner, otherwise it would have become a daily activity for us.

Our last day also happened to be the first of Ramadan according to the Islamic calendar, and we came across a Malaysian Muslim man with a pancake cart right outside our hotel. He spoke to us in an excited mix of Malay, Hindi, Bengali and English, and informed us that there was in fact a mosque on the southern end of the island in the village of Ban Tai where eight people attended Friday prayers the previous afternoon. Not only was he a friendly guy, his pancakes were delicious too!

We left early the next morning right after sunrise while the rest of the cove was still asleep. We had a flight to catch from Koh Samui airport in a couple of hours and did not want to risk missing it. Though the island is small, it’s packed with adventure and I wish we’d had time to zipline through the forest, snorkel with exotic fish, attend a Muay Thai boxing match and go to one of Koh Phangan’s renowned yoga retreats. I suppose it’s not possible to see everything in one trip, and it’s just as well because now we have a reason to go back to this secluded slice of paradise. 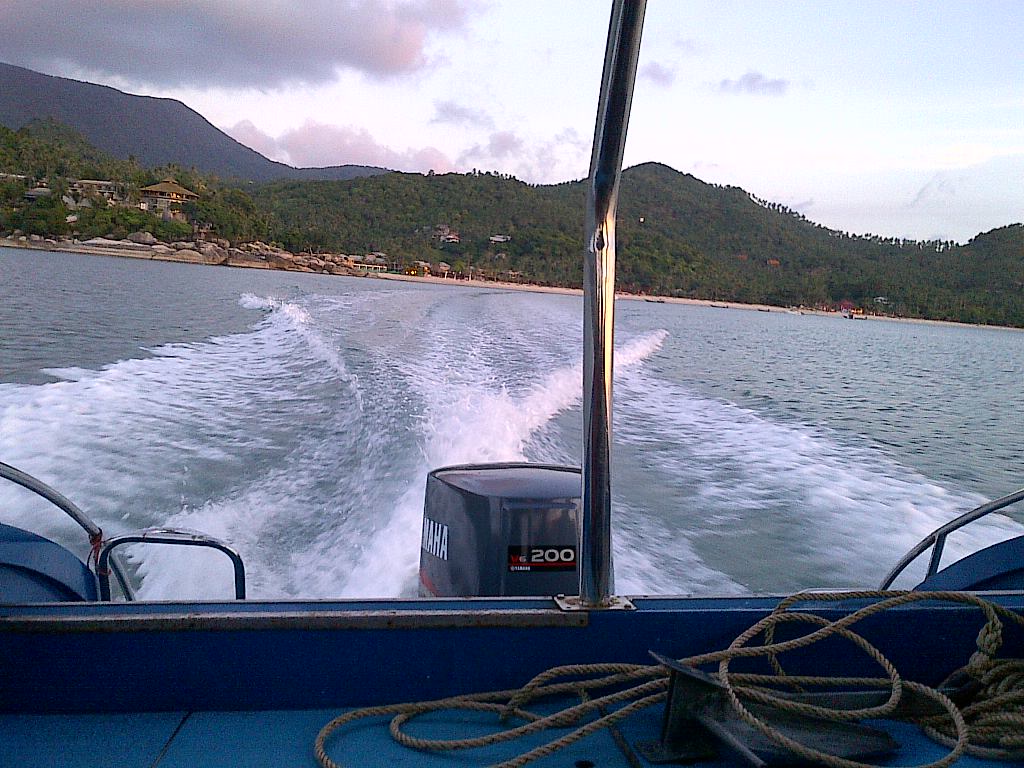 3 places to explore with your family this summer
Which hotel picture is a killer?
Unwrapping the secrets of Yangon
View All

Address: 43 Abai Avenue, corner of Mukanov Street, Abylai Khan Avenue, Almaty Timings: Tuesdays to Sundays Tickets: depends on show type and duration Built in 1969 as a humble theater, this place has become one of the most popular destinations for Russian literature and performance freaks. It is named after Michael Lermontov, a prominent Russian author/playwright. The theater hosts seve...

The Race Course and Equestrian & Horse Racing Club was established in 1977 and aims to revive the Arab custom of horse riding and grooming as well as training the new generation in the time-old tradition of riding horses. The course can house up to 40,000 spectators, and even children are welcome. Placing bets on the horses and the outcome of matches is strictly forbidden. Timings: Friday ...

The aerial cable cars take tourists around the table mountain, Cape Town’s most distinctive feature, at the bottom of which the city has been built. From these cable cars tourists are treated to some of the most fantastic and spectacular views of Cape Town.   Timings: Daily 8 30 A.M- 7 30 P.M Admission: R 120 [roundtrip] R 60 [one way] Address: Tafelberg Road Tel: 021-424-8181 ...

Based in Covent Garden theatre, The Royal Opera House is one of the largest performing arts venues in London. It is home to the Royal Opera, the Royal Ballet and the Orchestra of the Royal Opera House.    The building has been rebuilt many times since it was first constructed in 1732, but it is still considered a historical landmark and worth a visit even if you’re not planning to watch any of...