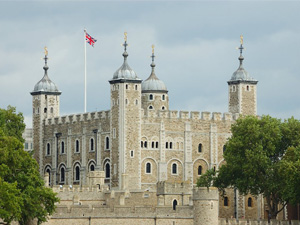 For William the Conqueror, defeating the Anglo-Saxons and invading England was the easy part.  The true challenge lied in consolidating his power and stabilizing the country.  To that end, he built a series of fortifications.  The grandest of them was London’s White Tower.  Construction began in the 1070s and was completed in 1100.  It was the most spectacular building in England, standing 28m tall and dominating the London skyline.  Though it was intended to be a fortress, subsequent monarchs used it as their home, and it was expanded significantly in the following centuries.  That practice ended when the Tudors took the throne.  Henry VIII upgraded the fortification, but left the palace empty.

The Tower of London is infamous as a prison.  Edward V and his brother were (presumably) murdered by their uncle and supposed protector, Richard III.  This dark incident later became known as “the Princes in the Tower”.  Anne Boleyn was also imprisoned and executed in the Tower of London.  The prison’s heyday was during the 16th and 17th centuries.  After that it was mostly used as an armory and a mint.  In the 19th century, those institutions vacated and the Tower of London became a popular tourist attraction and remains so to this day.

This is another must see attraction.  The tower has a substantial collection of armor.  The Crown Jewels are held here and are truly a sight to behold.  Only a small portion of the medieval palace remains.  It’s decorated in the manner it would have been all those centuries ago and provides an interesting insight into medieval Britain.  Tours begin daily at 10:45, 12:45, and 14:15.

More Places to visit in London